Of all the things that make up a great safari the most important factor to a guests enjoyment and understanding is their guide. He or she is the person who ensures that guests experience the destination and all it has to offer to the fullest. Stan is one of our small but dedicated team of guides at Imababala and does a great job at ensuring his guests have an amazing time.  A gentle giant with a deep voice and an infectious smile Stan is passionate about what he does. One guest recently said in a review

…Our guide Stan was fantastic. He can double as a voice over for James Earl Jones! He is knowledgeable about all of the game and birds. You also get the opportunity to do your game drives on the river with a pontoon boat, which makes the viewing even better when the wildlife is at the rivers edge or when the elephants are crossing the river. We saw many elephants and hippos and the bird population was amazing. Stan even spotted a leopard and honey badger on a night drive!

Stanislous Chizipi was born in Rusape, a small charming town in the eastern district of Zimbabwe. One would be forgiven for stating that Stan was born for the job he is doing. Born in a family of 8 in typical rural Zimbabwe, young Stan was a cattle herder from a very young age. Initially he followed his older brothers, cousins and neighbours until he was old enough to be trusted with the family herd by himself. It was during these formative years that he developed his skills in spotting birds and small animals since his home area does not have big game. His love for nature and all its glories was nurtured and allowed to grow in this environment.

All young boys in the rural areas desire to make it to the big city, seek employment and build a life. Stan was no exception and the completion of his O’Level studies in 1987 saw him move to the city of Mutare, Zimbabwe’s third largest city nestled in the beautiful Eastern Highlands. As fate would have it, he met a Mr Dixon, who was a member of the Eastern District Bird Club. It was this gentleman who introduced him to a world of birding and wildlife spotting, giving names and some fascinating background to some of the birds Stan had seen in his younger days. His childhood interest in animals and the wild grew until  he saw an article in a local department store’s magazine that featured a guide who was working in the Matopos National Park.

This article led him to explore ways in which he could become a professional guide. He got in touch with the  Zimbabwe Professional Guides Association who provided the tutorials necessary for him to obtain his Learner’s Guide Licence in 1998. Job openings in his field of passion where however not readily available and it was only until 2003, that he got his first stint at a guiding job. He has never looked back.

Stan points out a Hyaena track 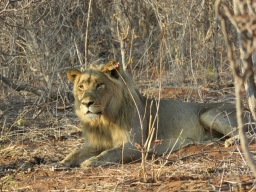 A young male lion near Imbabala

Stan has a wealth of stories to tell of his guiding expeditions and the vast experience he has gained over the years. He describes his favourite guiding experience as one night drive back in 2011 when he and his team came across a lion with a young buffalo kill. They watched him settle down to tackle the feed for about 10 minutes before 3 hyenas appeared on the scene. The scavengers tried to scare the lion off but he stood his ground prompting the hyenas to engage in their signature call for reinforcements. Within 5 minutes, 5 more hyenas joined the invading group and the pack mobbed the lion until he scurried off leaving his barely eaten meal.

Comedy does not reside on the small screen and theatres alone; the wild also offers its fair share of lighter moments! With a huge grin on his face, Stan speaks of the time he witnessed a slender mangoose confidently having a go at a two metre python which then strangled him and the hunter became the hunted. He says.

Do not start a battle you can’t finish.

It has been said that if you do what you love, you will never work a day in your life. Stan is one person who thoroughly enjoys what he wakes up to do on a daily basis. “I enjoy watching birds and taking guests on drives and cruises, it gives me immense pleasure to be able to share my love for nature and what it has to offer with people who are experiencing it for the first time. ‘I thrive in that environment’.

Of all the animals he has got to learn about and interact with, the firm favourite is the elephant. “This is because my first guiding experience in Victoria Falls was with the Wild Horizon’s Elephant Back Safari operation where I got so attached to this majestic land giant and learnt a lot about its gentle nature and behaviour”. To this day, any opportunity to work with elephants or interact with them in the wild brings about treasured memories of his early days of guiding.

Stan is passionate about young people and the next generation. His advice to young people looking to begin a career in guiding would be for them to be well-disciplined and willing to learn as this is a dynamic field where one has to constantly keep abreast with the ever-changing environment. He asserts that this is a rewarding career for those with a passion for it and have a good and thorough knowledge of their subject matter.

For the traveller, Stan has valuable tips on how to make the most of their trip. He reckons its best to take in the whole ecosystem to get the best possible bush experience. The flora and fauna is all interconnected and surprisingly highly dependent on each other hence the need for one to learn and understand how each animal is connected to the other and its usefulness in the wild. He sagely says

People miss a lot in their rush to see the next big animal.

Should you make it for a trip to our beautiful Victoria Falls and its environs, be sure to heed this experienced guide’s advice. Take your time and explore all that this magnificent land has to offer.

Images and Editing by Sarah Kerr